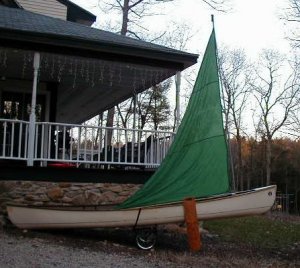 Poling, paddling, sailing and portaging 400 miles across Quebec and Maine is quite an undertaking for a couple of guys, unsponsored and unsupported. We chose to each go solo, in tandem tripping canoes. This is at odds with the current popular travelling styles, but hear us out:
1. The stability of a large boat is essential when standing and poling against heavy current.
2. A shallow draft will allow us to ascend further up small streams.
3. Seaworthiness is a big factor when under sail.
4. Most portages on the trip are along roads, quite suitable for portage cart use.
Every one is familiar with paddling. The advent of the gas-powered vehicle and road systems that extend road networks into every nook of the woodlands of the northeast makes paddling a viable option for virtually any river in the region. Indeed, this aspect of canoeing has become so easy and popular that most people don’t even realize that paddling is only one skill of many required to travel by canoe.

For the Shakedown Cruise, we had paddles, sail rigs, leeboards, new packs and dunnage, clothing, footwear, a portage cart, repair kits, first aid and throwbags to try or compare. Even though we’ve been on a mess of trips, it seemed prudent to do just one test run with all the junk in the boats.

We pulled into Olly’s driveway and JS left a note about why there was a car sitting there in the yard. First task was to load the boats onto the portage carts and wheel them a quarter mile to the river. We selected Canadian Boat Walkers for their foldability, durability and wheel diameter. The 16″ wheels are the biggest available, as far as I know. They drag a bit in the mud, but roll easily over tree roots, rocks, curbs and other obstructions. 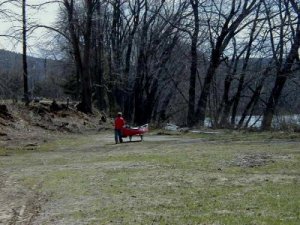 They weigh about 12 pounds, so they better be good. Having already used mine on a couple of trips, I knew mine would work fine on my Mad River Explorer. JS’s Old Town Discovery had a slight problem though. The bottom is a little flatter and wider, and the supports caused the bottom to buckle a bit. Next time he’ll probably lash his leeboard to the cart first, to spread the load.
Otherwise, the portage carts worked real slick. Even though they are rated for two hundred pounds, we found it best to load the empty cart on, then add the gear. And of course reverse that at the put-in. In addition to the carts, all our gear has shoulder straps or can be lashed to a pack, for those sections where a cart ain’t gonna do it.

We even questioned the paddling aspect of canoe travel. JS spent many a long winter’s evening carving, planing and sanding a couple of custom paddles from a few planks of butternut. Butternut is quite light and has a beautiful grain, similar to oak or ash, but has a nice buttery brown color. Alas, the wood wasn’t up to the stresses of vigorous river maneuvers and the paddles ended up breaking. Well, that’s what the shakedown is all about.
For the trip, we each plan to bring one bent shaft and one straight shaft paddle. The bent shaft will be used to cover the miles and the straight shaft for maneuvering the whitewater. As a back-up, or to relieve a sore hiney, we can stand up and use the pole as a double bladed paddle too. It’s surprising how much bite you get with a pole. Even though we’re celebrating all the ways to travel in a canoe, I expect we’ll spend the majority of the trip paddling.

Not that we did these things in the order that I’m talking about them, but the next piece of equipment is the pole. Our poles are 1″ x 12′ high-strength aluminum tubing, plugged with epoxy putty in the ends so they float. They weigh nothing. I have no qualms about putting my entire weight on my pole to push my gear-laden boat up through the toughest of currents. These too are home-made, but well used. I have been poling for about ten years now and it has got to be one of my favorite canoeing activities. 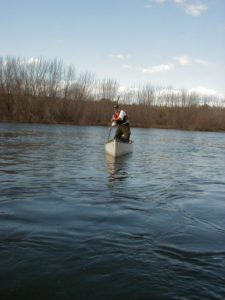 All these years I have had a piece of cord attached to my gunwale, for tying off the pole, which is flexible enough to conform to the curve of the boat (you can see JS’s stowed in the second photo, where we were leaving the car). JS was the first to add a small block of wood to the center thwart, to form a clip. These worked great on the trip, though I’m sure mine will get toasted sliding it on or off the roof rack.

Never again would I consider going on a trip without my trusty pole. Clipped in to my boat, it is out of the way and adds so much versatility. Once I had a twelve foot pole laying around, all kinds of uses started to occur to me. The next thing that occurred to me was sailing. Now a one-inch pole is kind of slender for a mast, but I reasoned that I could get away with using it if I used a smaller than normal sail. Getting rigged for sailing, however, is quite a complicated project. Not only are there a number of design, weight and skill issues, but it’s usually necessary to modify the canoe, which many people are hesitant to do. Something to do with resale value, I suspect.

Sailing components consist of the mast & boom, the sail, a way to connect to the boat (mast step and thwart), a leeboard and a rudder. I swiped a couple of bamboo poles, trimmed to 7 feet, for the booms. The sails were made from an old ripstop nylon tarp, cut in two diagonally and hemmed. This makes for about 35 square feet of sail, around half of a normal rig.

The mast steps were carved from yellow pine, and glued down with urethane caulk. The thwart was bolted to the gunwales. These were positioned behind the rear seat, so as to stay out of the way most of the time. Obviously, the boat is sailed stern-first. I came up with design for a leeboard that clamps onto the gunwale, which can be seen in the top photo. We opted not to build rudders, rather just use a paddle for steering.

We paddled into the wind across the lake, sails furled. At the lee shore we stopped and started rigging the sails. Sails up, leeboards down, and we had our first taste of halyards, sheets and paddles. Both leeboards broke almost right away. 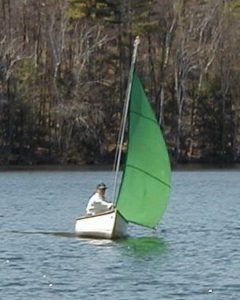 Not when they were acting as leeboards, but when the boat came around and they became “windward boards”. The design relied a bit on the board pushing against the hull. When we turned, the forces were pulling the board away from the boat. Mine broke at the handle, where I had cut too much wood away. JS hadn’t glued his and the screws pulled out. Without leeboards, the sails became down-wind rigs.
Even that prospect is not so bad. After all, our proposed route takes us more or less downwind across most of the lakes we will encounter. A lee board will help us maintain a course across or even partly into the wind, but by no means with the efficiency of a true sailboat.
The leeboards are the bulkiest part of the whole setup. Considering we are going to have poles anyway, it adds the bamboom which is light and stows right alongside the pole, the sail which wudges into the palm of my hand, and the leeboard. Coincidentally, the leeboard can be stuck behind the seat and leaned against the sailing thwart, to make a nice backrest.

Dang! There’s those poles again! We can adjust the tarp height with them.
After all this gear-wrecking, we finally made it into camp. One we call the pristine campsite, because no one else has ever used it, as far as we can tell. Here we had a couple of new tents, Duluth packs, a bucket pack I had made and an old crusier’s ax. The tents are Eureeka Alpine Meadows tents, mine a 2 man, and JS’s a 4. Between the tents we strung a tarp and made a nice gear-chucking spot out of the weather. I spread a two dollar poncho on the ground between and this worked well. Both tents are roomy and will suffice if we lose one on the trip. 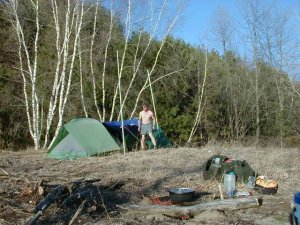 JS complained he had too much room left over in his Duluth packs. An uncommon complaint. Throwbag chucking reaffirmed our skills at that. I am pleased with my bucket pack. It’s made from a five gallon plastic bucket, with a watertight screw-on lid I got out of a catalog. I added shoulder straps to the bucket, without ruining the waterproofing. Inside, I used the bottom 2/3 for food, and I got one of those “parachute bags”, seen in the photo as a black & yellow thing. All those little things you need to get at are in the divided sections of the parachute bag. And the lid unscrews wicked easy, making them available anytime on the river or in camp.
Also seen from the photo was the dissapointing lack of rain, blackflies, snow and bitter winds. We had no chance to test any gear associated with those events. Although those zip-off pants look like they did the trick. Well, there you have it folks. I guess we’re ready for the big one. One month and 400 miles of who-knows-what through the wildest places we could find between Quebec and the coast of Maine.